What is a Personality Disorder? 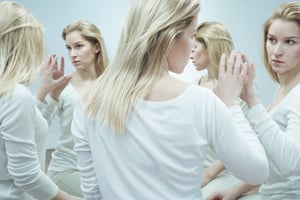 An individual’s personality is the combination of characteristics that makes them unique. Their patterns of thinking, feeling and behaving all combine to form their character as a whole. However, when unhealthy repetitions arise, this can sometimes point to one of the ten personality disorders. According to the American Psychiatric Association, “A personality disorder is a way of thinking, feeling and behaving that deviates from the expectations of the culture, causes distress or problems functioning and lasts over time.”

Without treatment, personality disorders can worsen, making it imperative that anyone who believes they or a loved one may suffer from one seeks professional psychiatric help. For your reference, we have compiled a list below of the ten personality disorders. However, it is important to remember that these are merely brief definitions and that each disorder is multifaceted and unique to each individual patient. Only a medical professional such as a board-certified psychiatrist can offer a definitive diagnosis.

A pattern of instability in personal relationships, sometimes resulting in suicide attempts, feelings of emptiness and intense emotions

A pattern of extreme attention seeking and exaggerated emotions. Those with histrionic personality disorder may feel uncomfortable at times when they are not the center of attention and may even use their physical appearance to stand out.

A pattern of need for admiration and sense of entitlement, combined with a lack of empathy for others

A pattern of obsession and preoccupation with order and control. This disorder is not the same as obsessive compulsive disorder (OCD), which is described by a pattern of recurring, unwanted thoughts that drive repetitive behaviors that significantly interfere with a person’s daily activities.

A pattern of distrust for others. Those with paranoid personality disorder often find it difficult to form close relationships and rather choose to spend time alone to avoid the spitefulness of others.

A pattern of indifference toward any human interaction, positive or negative. A person with schizoid personality disorder expresses very little emotion and is content to be alone.

A pattern of discomfort in close relationships, combined with peculiar behavior and social anxiety

If you believe that any of these personality disorder characteristics may apply to you or a loved one, contact Psychiatry Associates of Baton Rouge and request an appointment with one of our highly-trained psychiatrists. Together, we can explore the symptoms, reach an accurate diagnosis, and develop an effective treatment plan.